There are two reasons why night trains make sense: a lower environmental footprint than other transport modes, and saving time.

The environmental case is clear – Austrian railways ÖBB estimates that its night train Brussels-Vienna emits ten times less carbon dioxide than flying the same route. And that is not all – as almost all major railway lines in Europe are electrified, and as green electricity provides an ever increasing share of Europe’s energy mix, the environmental footprint of train travel is improving all the time. In comparison to travel by car the case is clear as well – no air pollution, no congestion, and lower emissions.

But what’s the problem?

Most passengers are not ready to take a train trip of more than 4 hours, perhaps 6 hours at a push. Especially business travellers who need to be at their destination in time for a morning meeting. There are two ways to solve this – to speed up train connections, or to improve night train connections. Some routes – like Paris-Marseille (3 hours) or Berlin-München (4 hours) are now fast enough – thanks to investment in high speed lines – for rail to enjoy a decent market share, and render planes unnecessary.

But there are some routes where daytime trains are always going to struggle to compete with a plane, time wise. Trips like Köln-Warszawa or Paris-Madrid are simply too far to be doable in the daytime even were high speed lines completed along the whole route.

The solution in these cases is time-saving night time connections instead, with a departure of trains between 19:00 and 23:00 and arrival between 06:00 and 09:00 the following morning. Couchettes, sleeping cars and mini-compartments mean a decent night’s sleep, and travellers arrive at their destination ready for the day ahead. A night train is an option for trips that, during the daytime, are not viable by train – normally in the 500km to 1500km distance bracket. 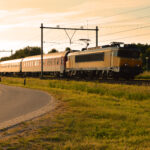 trainsforeurope
•
Follow
Today's #NightTrain pic is an #InterCityNotte at #Lecce, sent to us by Noam Schaulin
View on Instagram |
1/14

trainsforeurope
•
Follow
We're happy to have our first guest post on Trains for Europe - João Cunha explains how to reintroduce the Sud Express, and sent us this picture of it! https://trainsforeurope.eu/the-future-of-night-trains-in-iberia/ #sudexpress #renfe #portugal #spain #lisboa #hendaye
View on Instagram |
3/14

trainsforeurope
•
Follow
I’m often asked: is ÖBB’s #nightjet not an answer to the problems of night trains in Europe? The service is super, but is ÖBB ever going to run Köln-Warsaw or Amsterdam-Marseille? I doubt it. We need Europe wide solutions instead.
View on Instagram |
7/14